Sequoia to Startups: Have a Nice Hot Mug of STFU!

For most of my career things were different than today. Until just recently, if you were working on a startup, you kept your mouth shut and only talked about it on a need-to-know basis. Today a lot of startup teams see nothing wrong with telling 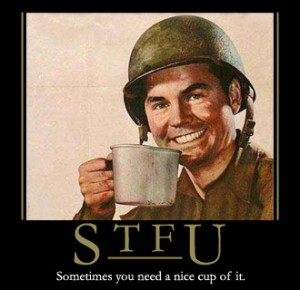 Startups Should Have a Mug of STFU

everybody about their project. This includes all manner of details which should have been kept locked in the vault. I suppose it’s part of  the social networking culture which I have never seen the point of personally … but that’s a story for another day.

So here is what Sequoia Partners venture capitalist Douglas Leone has to say to the Chatty Cathies out there:

Little companies have really 2 advantages: stealth and speed. You [Arrington] come from the world of speed and no stealth.

The best thing for little companies to do is to stay away from the cocktail circuit….We at Sequoia have never released a press release in 35 years….Then run like a son-of-a- gun. Don’t say anything to anybody. (source)

Leone then points out that many of today’s web-based startups are created in a weekend and can, therefore, be knocked off in a weekend as well. So why would you disclose your ideas and plan to complete strangers before your venture is even up and running? Give it at least a week’s head-start, bro.

Old-timers will recall the dotcom days of the 1990s when revenueless but venture capital funded companies would blow $20K to $40K per month on retainers with public relations firms in the belief that mentions in various trade magazines would somehow compensate for the non-existence of customers.

The lesson here is to focus on doing it rather than talking about doing it.

3 Responses to Sequoia to Startups: Have a Nice Hot Mug of STFU!