Just three weeks I read a heart-wrenching story on Reddit.com about an attack on a defenseless orphanage in Kenya by some thugs. I’m not sure of the details but somehow the story ended up on Reddit with a graphic image of a man named Omari who had suffered a machete wound to the head while trying to protect the kids.  The wound put him in the hospital for two days and required major stitching. (Don’t click that unless you can handle grisly wounds.) Omari and his Reddit associate then asked Redditors, who have raised money before for various good causes, to donate $2000 for a wall to protect the orphanage.

Long story short, within about 24 hours over $50K had been raised to build the wall and help the orphanage out in other ways. At last count, over $80K has been raised. 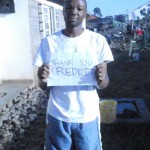 About a week later this thank you photo was posted on Reddit showing the kids. And today we got a picture of the new wall.

You can find out more about the orphanage here, the kids  here,  and about Omari.

One Response to Another Amazing Crowdfunding Success Story: Omari & the Orphans