How to Entice Angel Investors Into Funding Your Startup

I came across two recent blog posts on Shark Tank recently which stand out because they have such opposing views of the show. First, you have Mark Cuban’s take on the show. As he is a member of the panel it’s pretty much what you would expect. No surprises. Second, you have a much longer piece by James Altucher in which he reveals what he has unearthed about the investors financial positions and negotiating tricks. The section on Kevin O’Leary’s negotiating tricks is particularly insightful.  Here’s one:

Kevin O’Leary is famous for this deal. He waits for the other Sharks to say “I’m Out” and then he knows he’s the only possibility left for the entrepreneur. So then it suddenly doesn’t matter at all what they are asking for. Let’s say the entrepreneur is growing, they  have profits, they have one million in sales, etc. Kevin O’Leary doesn’t care at all.

Instead, he makes the Hail Mary offer. Let’s say they were asking for $500k for 10% of their company, valuing their company at $5 million. Even if the company could be reasonably valued at that, he doesn’t care. 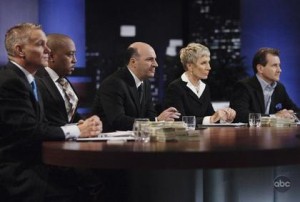 Shark Tankers Faked it Till They Made it

After you have read James’s piece read my three part series  on Fake it Till You Make it.

Be sure to learn how to use revenue royalty certificates to close deals.